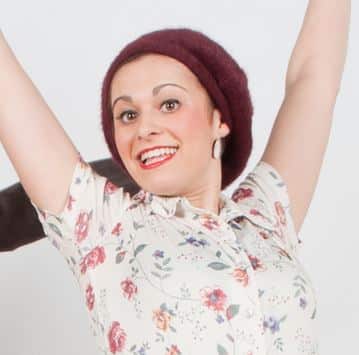 Native of Montpellier, France, Maeva Truntzer started modern jazz dance at the age of 4 years. A few years later she started participating in Rock Sauté competitions. After several years, Maeva was attracted by more rythmical dances like Boogie Woogie and the Lindy Hop.

With easy and surprising abilities, Maeva rose through the ranks to become the Supreme Champion of Europe and the World in Boogie Woogie, Junior, at the age of 15 years. She repeated this achievement three years later in the highest category of this discipline. At 18 years of age, Maeva left her hometown and her own hairdressing business to teach in Paris at one of the most prestigious dance schools with her partner.

Subsequently, she joined the musical comedy troop, “L’enfer d’Euridice”, which produced several shows at La Cigale in Paris. Maeva continues her training with several choreographers with whom she has acquired numerous competencies in dance, teaching and theatre.

For four years now, she has traveled the world to teach Boogie Woogie in international workshops.

She is now much more oriented towards the world of Swing in general.

After having received the fourth world championship titles in Boogie Woogie in 2010 Maeva has also won many competitions in Lindy Hop and in the Showcase category (1st place showcase at Lindyshock, 1st place Strictly Lindy at Boston tea party ….)

With a strong character and great charm, Maeva is determined to succeed in this artistic domain.